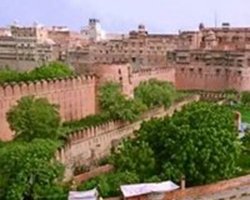 Situated fantastically in the middle of the Great Indian Desert, the Thar Desert, Bikaner is one of the most important and historical cities in Indian state of Rajasthan. Famed as the Camel Country, the desert city of Bikaner is home to several historical monuments and places of tourist interested, providing awesome tourism experience to relish for lifetime. Formerly the capital of the princely state of Bikaner, this beautiful desert city was founded in 1486 by Rao Bika, the son of Rao Jodha who founded Jodhpur. This historical city has been developed into the fourth largest city in the state of Rajasthan.

Bikaner offers a wonderful tourism opportunity to travelers coming from the different parts of the world. The desert, the sand dunes, the forts, the monuments, the temples, the camel safari rides, the havelis, the gardens, the lakes, the heritage hotels, unique culture & tradition, vibrant fairs & festivals … there are so many things within the city of Bikaner for which the entire Rajasthan is internationally famous. Hence, exploring Bikaner and its surroundings will indeed give a delightful experience of complete Rajasthan tourism to cherish for the life time.

The historical city of Bikaner exhibits its ancient opulence through magnificent forts and palaces, superbly constructed in red sandstone. The Junagarh Fort, also called Old Fort, in Bikaner is a key attraction in the city attracting the attention of tourists with its spectacular architectural styles and arresting beauty. The stunning architecture of the Junagarh Fort will never fail to lure you on your Bikaner sightseeing tour. The fort complex consists of several other attractions and structures including different gates, temples, palaces, museum, and havelis.

On the whole, together with city attractions and attractions around the city, the city of Bikaner offers a great tourism experience to cherish for lifetime.

How to Reach Bikaner

The beautiful and historical city of Bikaner is well-connected with other Indian cities. Tourists can easily reach here by roads, rails, and flights. Jodhpur is the nearby airport to access the city of Bikaner.

By Air: Bikaner city has a Domestic Civil Airport called Nai Airport. The airport is not fully functional hence the most convenient way to reach Bikaner by flight is the Jodhpur Airport which is connected by many Indian cities. From here travelers can hire taxies or take car rental to reach Bikaner.

By Road: The city of Bikaner is well-served with roads. It is well connected with cities like Jaipur, Alwar, Jodhpur, Jaisalmer, Delhi, Agra, Ludhiana, Ambala, Bhatinda, Panipat, Haridwar, Ahmedabad, and several other cities and towns.