Golden Triangle with Varanasi and Khajuraho 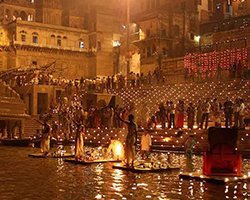 Golden Triangle with Varanasi and Khajuraho

The designated representative of Rover Holidays will meet and greet you at New Delhi International Airport as you arrive here. Then you will be transferred to your pre-booked hotel. Freshen up and relax. Dinner will be organized at the hotel restaurant. Have comfortable overnight stay at the hotel room.

Take breakfast and then check out from the hotel in Delhi. Catch flight to Varanasi from Delhi Airport. Our representative will receive you from Varanasi Airport and then transfer you to the pre-booked hotel. Later proceed for Varanasi sightseeing tour covering important bathing ghats and temples like Kashi Vishwanath Temple, Tulsi Mansa Temple, Monkey Temple, Bharat Mata Temple, Manikarnika Ghat, Manmandir Ghat, Dasaswamedh Ghat, Ahilyabai Ghat, and Harishchandara Ghat. Some other attractions you may visit include Alamqir Mosque, Bharat Kala Bhawan Museum, Rana Mahal Ghat, Kathwala Temple, Gyan Vapi Well, and Ramnagar Fort. Get back to the hotel by evening to have dinner and overnight stay.

In the early morning, our representative will take you to the banks of Ganges River. Enjoy boat ride on the River Ganga, India’s most scared river. Get back to hotel for breakfast and then check out from the hotel. Proceed to Varanasi Airport to catch flight to Khajuraho. Our representative will receive you from Khajuraho Airport and then transfer you to the hotel. Have dinner and overnight stay at the hotel.

After breakfast at the hotel, proceed for Orchha sightseeing tour covering attractions like Jahangir Mahal, Rai Praveen Mahal, The Chaturbhuj temple and The Royal Chhattris by the Betwa River. Get back to hotel and complete check out formalities. Later, drive to Agra and check in at the pre-booked hotel. Freshen up and relax. Have dinner and stay overnight at the hotel.

Have a very hearty breakfast at the hotel. Later embark on full day sightseeing tour of Agra. Visit the magnificent Taj Mahal which will never fail to lure you. Built in white marble, the Taj Mahal is a beautiful mausoleum, constructed by Mughal Emperor Shah Jahan in the loving memory of his most darling wife, Mumtaz Mahal. Hence, the beautiful Taj is also lovingly known as the Symbol of Love and Romance. It is one of the most visited and beautiful buildings in the world known for their exceptional architectural styles and beauty. Later, visit the magnificent Agra Fort, also called the Red Fort or Lal Quila of Agra. The Taj Mahal and the Agra Fort, both are UNESCO World Heritage Sites. Thereafter proceed to see other attractions of the city such as Itimad-ud-Daulah Tomb, Mehtab Bagh, etc. Explore local bazaars in the evening or re-visit the Taj complex to see the excellence of Taj Mahal at sunset. On time get back to the hotel for dinner and overnight stay.

Have a very hearty breakfast and check out from the hotel. Drive to Delhi en route visiting the Tomb of Mughal Emperor Akbar at Sikandra. On arrival in Delhi, Rover Holidays representative will transfer you to the Delhi International Airport where you will get flight back to your home/onward destination with sweet memories of Golden Triangle with Varanasi and Khajuraho.